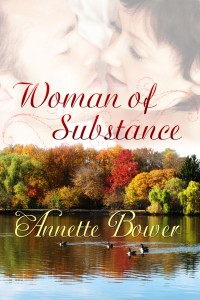 ***** A thought-provoking contemporary romance that reminds me a lot of recent television movies, “To Be Fat Like Me” and “The Pregnancy Project.” Recommended for romance readers and anyone who wonders what it might be like to walk in someone else’s shoes and find the experience both educational and worthwhile.”
R. Barri Flowers, Bestselling Author ,

Woman of Substance
by Annette Bower