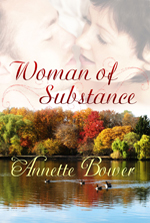 "You will never understand what it means to be fat." With those words, grad student Robbie Smith begins the Fat-Like-Me project. In order to support her thesis, she puts on a fat suit to measure people's reactions to the new her.

Accused of embezzling funds, Professor Jake Proctor returns home to spend quality time with the only father he has ever known. There, he meets an intriguing overweight woman who reminds him of his late grandmother. She's witty, charming, and cares deeply for those around her, including his dying grandfather.

When Robbie meets Jake while she's in disguise, she deceives him for all the right reasons. But how long can she maintain the deception before Jake discovers that she is not who he believes her to be?

Woman of Substance by Annette Bower is an intriguing romance that puts the spotlight on prejudices faced daily by people who are overweight in today's society. When slender graduate student Robbie Smith dons a fat suit to gauge reactions for her thesis, she ends up falling for a professor, Jake Proctor, who in turn is attracted to her in disguise, reminding him of his late grandmother. Will Robbie's deception cost her a chance at real love? Or will the point she was trying to make be enough to give her the happily thereafter of romance? The book reminds me a lot of recent television movies, "To Be Fat Like Me" and "The Pregnancy Project." Recommended for romance readers and anyone who wonders what it might be like to walk in someone else's shoes. --R. Barri Flowers, Bestselling Author, www.rbarriflowers.com

Print copies of Woman of Substance are also available at: